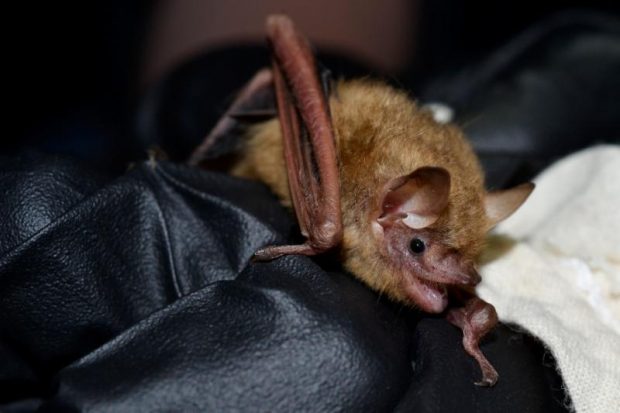 via the Oklahoma Department of Wildlife Conservation:

White-nose syndrome has been confirmed for the first time in Oklahoma, making it the 31st state with the deadly disease that affects hibernating bats.

Scientists with the U.S. Geological Survey (USGS) confirmed the disease from a skin biopsy of a tricolored bat, one of two bats tested from a privately owned cave in Delaware County. The county is also home to portions of the Ozark Plateau National Wildlife Refuge, established to benefit federally protected cave species, including endangered gray and Ozark big-eared bats and threatened northern long-eared bats.

The fungus that causes white-nose syndrome, Pseudogymnoascus destructans, was first detected in the cave in 2015, but at that time bats did not appear to be sick. The fungus has also been found in four other eastern Oklahoma counties; on bats in Cherokee and Adair counties in the winter of 2015-2016, and on bats in Ottawa and Sequoyah counties this winter.

“It’s troubling that white-nose syndrome continues to push west and threatens the Ozark Plateau, a stronghold for bat conservation,” said National White-nose Syndrome Coordinator Jeremy Coleman of the U.S. Fish and Wildlife Service. “We are focused on finding solutions and helping bats survive. We’re committed to working with Oklahoma and other partners across the country to closely monitor bats and fight this devastating disease.”

Since 2010, biologists with the Oklahoma Department of Wildlife Conservation have been part of the national response to white-nose syndrome, with Oklahoma State Parks, Rogers State University, University of Central Oklahoma, University of Science and Arts of Oklahoma, caving organizations, and the U.S. Fish and Wildlife Service.

These partners conduct disease surveillance while monitoring wintering bat populations. This winter they took samples from bats in 12 limestone and five gypsum caves. The samples were sent for analysis to both the USGS National Wildlife Health Center in Madison, Wisconsin, and to the White-nose Syndrome Transcontinental Transmission Study led by the University of California at Santa Cruz as part of a National Science Foundation-funded project.

“The fungus associated with white-nose syndrome thrives in cold conditions,” said Melynda Hickman, wildlife diversity biologist for the Oklahoma Wildlife Department. Fungal growth on hibernating bats’ muzzles and wings irritates the bats, waking them when their food resources — namely insects — are minimal. Because these wakened bats use valuable stored energy and are likely unable to eat, they may not survive the winter. “We are hopeful Oklahoma’s shorter, more mild winters, when compared to the northeastern part of the country, will slow the spread of the fungus, lessening the impacts to bats in our state.”

Bats play an important ecological role; each bat can eat up to 3,000 insects, including mosquitoes and agricultural pests, in a single night. Biologists are concerned about how white-nose syndrome will affect the bat populations in the future.

“Both bats and their cave environments are incredibly sensitive,” Hickman said. “We do know people can unknowingly spread the fungus if they do not follow proper decontamination procedures. A great way to help prevent the spread of the fungus is to avoid entering caves unnecessarily.”

Posted On 03/27/2019
Every morning I look over some headlines in national news publications online, and occasionally one strikes me as important. The following article was one of…

You Can Help Save the Monarch Butterfly!

The Smithsonian’s Water/Ways exhibition is traveling from museum to museum around Oklahoma from now through April 2020.

Reserve an hour of your summer movie-watching time for a film about the importance of the soil under your feet. You don’t even have to pay for the ticket!

March fires bring April flowers – if the rains are right! This spring the Kerr Center conducted a prescribed burn of an eight-acre native prairie, which is part of a larger 40 acre pasture. We…

The University of Arkansas Cooperative Extension Service now has an online Herbicide Injury Database that shows images of different plants’ responses to herbicides.  The plants included in the database included vegetable and field crops, as…