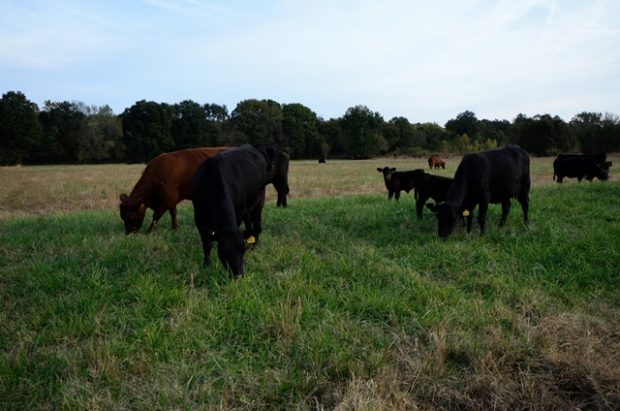 The Kerr Center livestock program tries to extend the grazing season as much as possible. The ideal situation would be to feed no hay, 365 days a year.

There are three basic strategies for working toward that goal. One would be to adjust the stocking rate by buying and selling cattle according to forage availability. That works fine for stocker operations, but not for cow-calf operations like the one on the Kerr Ranch.

Heading into the winter of 2012-13, Mother Nature took away the first of those possibilities: summer drought left much lower reserves of stockpiled forage than usual for winter grazing.

To prolong the grazing season and feed less hay, we planted two six-acre pastures to wheat. We applied chicken litter at a rate of 2 tons per acre, and drilled the wheat at 90 lbs. per acre. An additional nine-acre pasture was used as a control, receiving no chicken litter or wheat seed.

The wheat pastures produced between 1,920 and 2,937 pounds of forage (expressed as dry matter) per acre, compared to 1,300 pounds per acre in the control.

By April 9, the wheat was ready for the cattle to graze. It fed the 31 head for a total of 38 days. That bought five and a half weeks of time for the other pastures to grow spring forage.

The whole point of this exercise was to reduce the amount of hay we needed to feed. At first glance, though, planting wheat pasture for grazing might seem more expensive than feeding hay.

However, the hay would have to supplemented with protein, whereas the wheat had high enough nutritional value not to require supplementation. After adding the cost of protein supplementation, the cost per head between hay and wheat pasture might be about equal.

Full details on the 2013 wheat grazing study are contained in the presentation, Extending the Grazing Season, available free online.

Posted On 07/26/2017
Sustainable farmers and ranchers now have two more ways to claim a premium for their ecologically friendly management practices, thanks to two new labeling programs.…

Legumes Lead the Way to Lower Water Use in Livestock Production

Leguminous crops with a reputation for deep thirst may prove key to helping livestock producers make better use of water.

Posted On 06/16/2016
The livestock workshop at the Kerr Ranch on June 4, 2016, was a highly educational and informative event. For those unable to attend - or…

Almost every Kerr Center livestock workshop teaches the basics of estimating available forage and figuring where to place temporary fences to match the number of livestock with the amount of forage available.  These basic skills…

Many pastures on the Kerr Ranch are currently knee-deep in fescue, with seedheads nodding at waist height and thick stands of clover coming into white blossom beneath. The only thing missing from the picture is…

This is a report on the Kerr Center’s experience with management intensive grazing (MIG). It defines MIG, explains and demonstrates how to calculate grazing period, rest period, and stock density, and summarizes two Kerr Center…

This is a book chapter, used in the livestock track of the Oklahoma Beginning Farmer & Rancher Program, that discusses how to divide a farm into paddocks for rotational grazing. It covers soil and water…