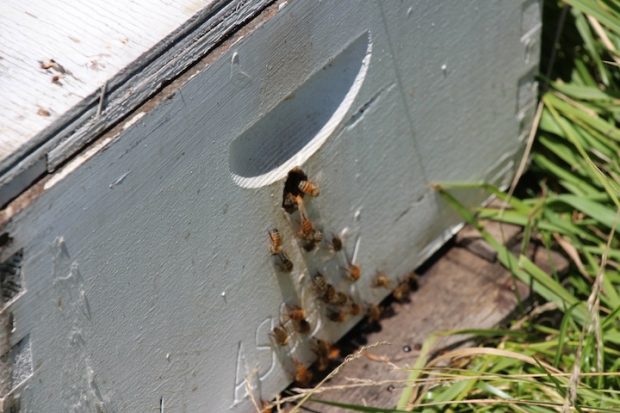 Last month at the Kerr Center, Jeff Asbury led a free workshop on beekeeping. In addition to sharing his knowledge as an instructor at that event, Mr. Asbury has recently begun keeping honey bee hives on the Kerr Center ranch.

Mr. Asbury has plenty of knowledge to share. The Le Flore resident has piled up half a century of experience. He ran 4,000 hives in California for a number of years before working in the queen industry for a couple of years. After moving to Oklahoma about 11 years ago, he ran 700 hives, working them from here to North Dakota. He has worked with several bee clubs, has extensive knowledge of pollination, and has worked with U.C. Davis entomologist Eric Mussen.

Ramping up the number of people who know their way around honeybees is more important now than ever. In earlier years, winter losses of honeybee colonies averaged around 20% or less.  When the mysterious Colony Collapse Disorder exploded onto the scene in 2006, that situation changed. Over the past decade, the winter colony loss rate has averaged nearly 40%.

President’s Note: Concerns about a New Technology and Sustainable Agriculture

Most sustainable agriculture practitioners do not like GMO crops. The reasons given are numerous. Mixing plant and animal genetics, ownership and patenting of plants, and who controls the genetics, are just a few.

Posted On 05/25/2015
Heavy rains rendered the Cannon Horticulture too mucky for the planned plasticulture demonstration at the May 9 workshop, but ODAFF and the Kerr Center are…

Creating pollinator habitat can be as simple as a tweak to how you mow your lawn. Start mowing for pollinators and watch the wildflowers blossom!

The Kerr Center had a table at the Monarchs on the Mountain celebration in Tulsa’s Turkey Mountain Urban Wilderness Area September 24th. If you missed the event, you can still find a wealth of information…

The National Agroforestry Center has developed a number of publications that describe the role agroforestry can play in supporting pollinators. “How can agroforestry help pollinators?” is a two-page information sheet that highlights opportunities to recognize,…

Two new studies by researchers at the University of California highlight the benefits of keeping native vegetation and crop fields in close proximity. In one, researchers found that hedgerows planted near tomato rows created habitat…