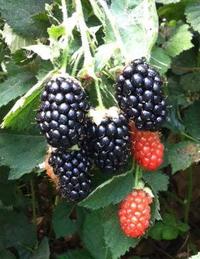 A University of Arkansas study has found that using high tunnels in berry production can increase yields, extend the harvest season, and improve fruit quality compared to field production. However, care must be taken to manage pests.

In the Southern Sustainable Agriculture Research & Education (SSARE)-funded project (LS12-250), “Extending the Market Season with High Tunnel Technology for Organic Fruit Production,” researchers explored high tunnel technology to extend the production of summer berries to achieve earlier spring harvest of blueberries and blackberries, and to allow for an extended autumn production of primocane blackberries and raspberries.

“Blueberries and blackberries are traditional southern fruit crops, but harvest and market season is confined to only a few weeks during the summer,” said Curt Rom, a horticulture professor with the University of Arkansas. “Raspberries are not well adapted to hot, humid conditions because the flowers and fruit are not tolerant of high summer temperatures. Even fall-bearing cultivars are limited because they flower during the summer heat.”

Rom and his colleagues wanted to test how well the crops performed in high tunnels and modified high tunnels (tunnel in tunnel systems) compared to open field trials.

Although organic blueberry establishment was difficult, once that was achieved, the researchers found that blueberries in the high tunnels out-yielded the field plots by 45 percent.

In the trials to extend the harvest season of autumn primocane blackberries, researchers found that the high tunnel blackberries had an increased yield two to three times that of the open field plots. In addition, harvest was extended anywhere from one to two weeks in the high tunnel. In the tunnel-in-tunnel system, harvest was extended from two to 5 weeks with added freeze protection. As a low-scale technology, tunnel-in-tunnel systems are useful in both increasing high tunnel temperatures during cold periods, and retaining nighttime temperatures.

“The results of the study showed that high tunnels make an ideal complimentary system to field production” said Rom.

Despite the production successes with high tunnels, the researchers faced challenges with pest management, especially in the raspberry high tunnel trials. Insect screens were placed on high tunnels to protect the fruit from spotted wing drosophila, however the screens offered little protection against aphids, two-spotted spider mites and broad mites.

“As a result of these studies a better understanding of bio-pesticide and biological control options for high tunnel has been initiated and needs and opportunities for further research have been identified,” said Rom.