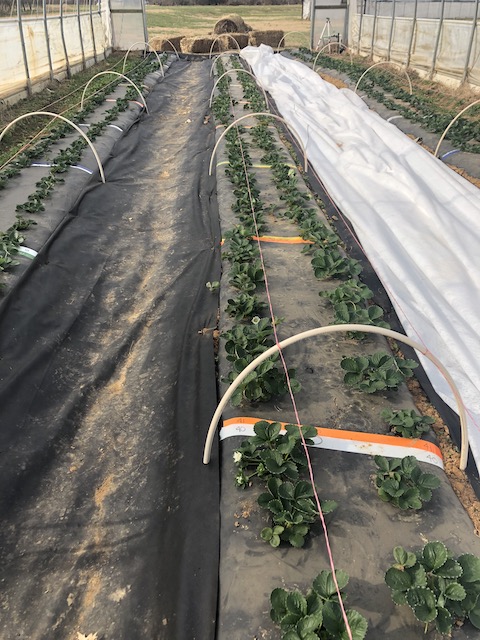 The Kerr Center’s new Education / Horticulture Program Manager, Karlee Pruitt, has recently finished her Masters of Science in Horticulture from the University of Arkansas. There, she completed a master’s thesis project on the efficacy of different biopesticide combinations for strawberry plasticulture production in high tunnels. The goal of this project was to determine which combination of biopesticides had an advantage in fruit marketability and for disease and mite control compared to the untreated control.

Common compounds that make up the active ingredients consist of microorganisms (bacteria, fungi, oomycetes, viruses, and protozoa), biochemical (essential oils, chitin, and chitosan), semiochemicals (insect pheromones), and plant incorporated protectants (PIPs). These compounds are considered to have low risk for people, wildlife, and the environment.

Project Design
This project was completed over a two-year period beginning in 2017 and ending in 2019. In October of each year, two strawberry cultivars, “Camino Real” and “Sweet Sensation,” were planted in raised beds under a high tunnel. Six treatment options were tested, consisting of one control, one nutrition-based treatment (CAB), and various biologically based fungicides and insecticides (listed in the table below). The chemicals listed for each treatment combination were mixed and applied together as one spray for each application.

Results
In 2018, the control treatment had the highest marketable weight over the other biopesticide combinations. Disease incidence was 25%, and two-spotted spider mite populations were above the economic threshold (ET) of 5 mites per leaflet.

In 2019, the CAB combination (Max-In Calcium + Aza-Direct + Max-In Boron) had the highest marketable weight with the control having the second highest weight. Disease incidence was less than 2% for 2019, and the mite population did not surpass the ET of 5 mites per leaflet. Results from both years indicated the biopesticide combinations did not have a significant effect on marketability, disease incidence, or mite populations.

Management practices, such as selecting the right site, practicing sanitation, and scouting for disease or mites, can decrease the use of biopesticides and other pesticide costs. The point of this experiment was to test these different biopesticides in combinations with one another. In order for a producer to replicate this study, they would need to apply according to the spray schedule used in the study.

Good management practices would require the producer to monitor the plants for disease and insect levels and apply when the economic threshold is reached.   For example, when the mite populations were below the ET of 5 mites per leaflet, there is no reason to spray an insecticide. Results from other studies have indicated that these chemicals on an individual basis have shown positive results. The recommendation for the best method of control is to follow the label of each individual biopesticide and apply accordingly.