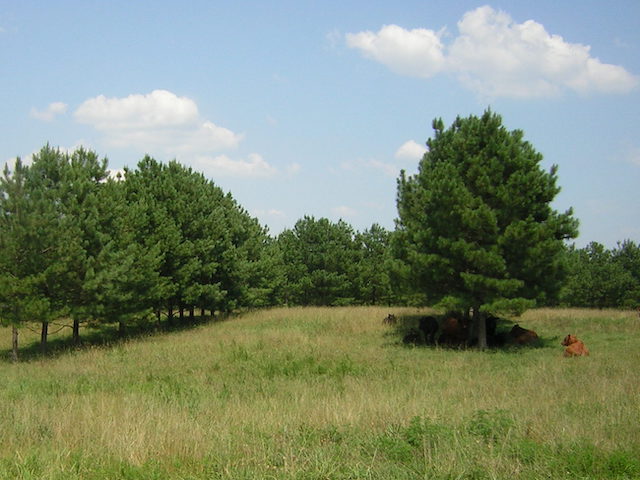 We’ve long touted the benefits of silvopasture – combining tree plantings and cattle grazing on the same land. Cattle have better access to shade in summer and shelter in winter, and gain weight faster as a result. Meanwhile, the trees provide habitat for wildlife.

Now, new research has shown that silvopasture systems can actually sock more carbon into the soil than the cattle emit, making cattle grazing a carbon-neutral proposition at the level of the individual ranch.

Researchers in Brazil have established that, by planting eucalyptus trees over about 10-15% of a pasture’s total area – about 100 to 150 trees an acre – they can cut 30% off the time it takes cattle to reach slaughter weight, while doubling the stocking rate.

Meanwhile, the fast-growing eucalyptus trees on a single hectare are producing over 10,000 board feet of wood each year – enough to suck 5 tons of carbon out of the air, about a dozen cows’ worth of emissions. Since most of the wood harvested is used for construction, the carbon inside it stays locked out of the atmosphere for decades to centuries.

In these experiments, the trees are planted six feet apart in rows 50 to 75 feet wide – within the same general range as some of the agroforestry projects on the Kerr ranch. In another parallel to the Kerr Center version, cattle are withheld for the first year to protect the young saplings, and the rows are hayed rather than grazed.

The similarities between Brazilian and Oklahoman silvopasture systems may or may not end there.  The researchers note that the outcomes vary greatly depending on factors like bioregion and tree species. For instance, shade may boost forage productivity more in Brazil’s hot tropical climate than in Oklahoma.

So far, no one has done equivalent experiments to show whether similar levels of carbon sequestration are possible with, say, loblolly pine in southeastern Oklahoma. It’s an intriguing possibility, though.

Another end-use of the wood from the Brazilian experiments, charcoal, points the way to another potentially potent link between silvopasture and carbon sequestration. On its own, biochar can be a powerful tool for locking carbon out of the carbon cycle for the long term. Now, research is showing that biochar can also help reduce cattle’s contribution to the atmosphere’s load of greenhouse gases.

Cattle’s digestive systems naturally produce methane – a greenhouse gas with 20 times the warming effect of carbon dioxide. (It doesn’t persist in the atmosphere as long as CO2, but it does turn into CO2 when it breaks down.) This is one of the main reason that cattle have drawn so much attention in greenhouse gas mitigation efforts.

It turns out that when biochar is mixed into cattle’s feed in small amounts – one percent or less – it can shave 10 to 20% off their methane emissions. Moreover, as it passes through their digestive tracts, it acquires a charge of unused nutrients and beneficial microbes that all hit the soil together when the patty leaves the cow. That combination helps more of the manure enter the soil faster, and stay there longer.

Research in Australia has demonstrated that the cattle themselves – coupled with dung beetles – make an ideal distribution system with their natural grazing activity. All the benefits typically associated with increased levels of soil carbon – increased water holding capacity, improved tilth and fertility – appeared. The beetles’ burrowing even brings phosphorus from deep in the soil up into shallower layers where plant roots can more readily reach it.

These studies are far from the final word on the potential benefits of silvopasture systems, but they do open the door to new possibilities for them to reach previously unenvisioned levels of mutually reinforcing sustainability.

This article is from the August 2021 issue of the Kerr Center newsletter, Field Notes.
< Previous article – Next article >

Livestock Welfare and Performance in Silvopastures

via the Association for Temperate Agroforestry: One benefit commonly claimed for silvopasture is that livestock grazing in hot weather will gain more weight in pastures with trees than in full sun. This is because they can graze, or at least rest, in the shade, reducing their heat stress and putting more of their food energy…

Too Wet? Too Dry? Silvopasture Can Make it Just Right

An recent article on agroforestry served as an excellent illustration of the way that silvopasture can turn problem fields into prime pastures. The land in question, a floodplain site at a North Carolina State University research farm, had patchy soils with concentrations of both sand and clay. The sandy areas dry out quickly, especially under…

Marketing Agroforestry Products is a new free publication highlighting the diversity of potential agroforestry crops around the U.S.