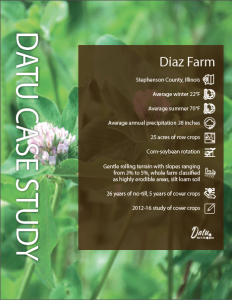 via the National Association of Conservation Districts:

Soil health practices such as cover crops and no-till can result in an economic return of over $100 per acre, according to a set of case studies jointly released by the National Association of Conservation Districts and Datu Research, LLC.

Cover crops and no-till can limit soil loss, reduce run-off, enhance biodiversity, and more. Naturally, farmers who are considering adopting these practices are keen to know how they will affect their farm’s bottom line.

During the three-year study period, corn-soybean farmers experimented with cover crops and/or no-till, and quantified the year-by-year changes in income they attributed to these practices compared to a pre-adoption baseline. They found that while planting costs increased by up to $38 per acre:

The studies also found that with adoption of these conservation practices, net farm income increased by up to $110 per acre. Included in the farmers’ calculations was the considerable time they spent attending workshops or searching the internet to learn about no-till or cover crop practices.

The case studies can be viewed and downloaded here and the parent report is available on request.