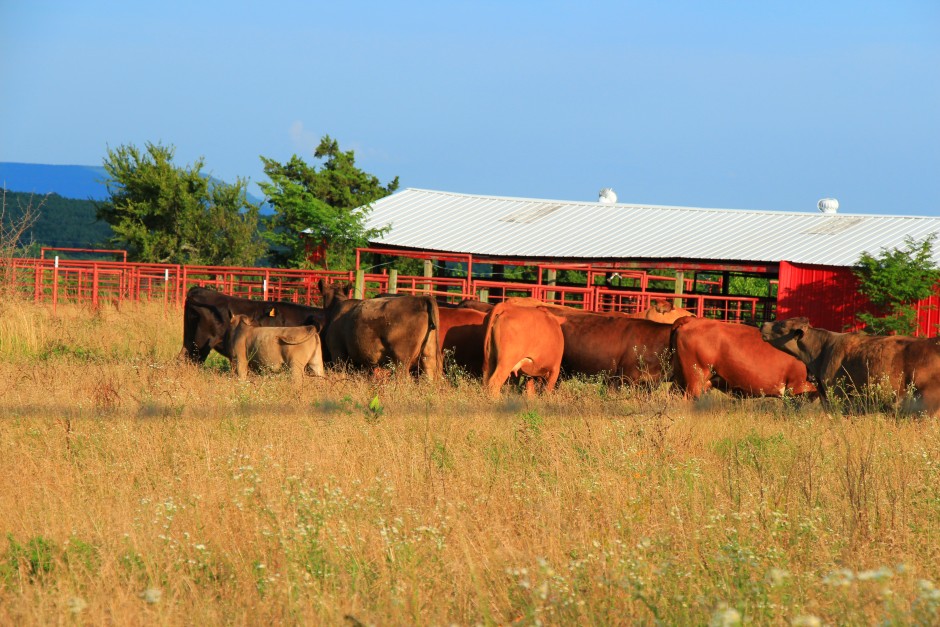 Ecology of the Kerr Center’s Stewardship Ranch: Plants and Wildlife and How We Manage in Concert with Nature

The Stewardship Ranch is located in the Arkansas Valley eco-region.  This eco-region runs from east central Oklahoma to central Arkansas.

The broad Arkansas River Valley forms a break between the Ozark Highlands to the north and the Ouachita Mountains to the south.

The Stewardship Ranch is located just north of the Ouachita Mountains. The Crosstimbers eco-region forms the western border.

Flat lowlands with poor natural drainage characterize most of the area. Isolated hills are scattered throughout the plains. Soils in the area are generally poor except along larger streams. A tributary of the Arkansas, the Poteau River, runs through the ranch. Like other tributaries, it is a slow, clear stream. 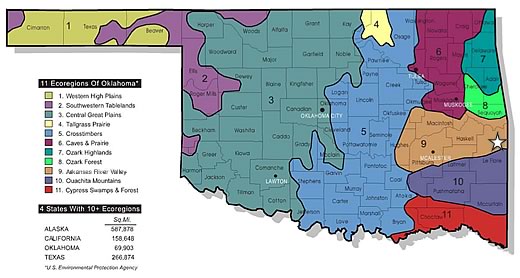 In the late 1980s, the Kerr Center inventoried the vegetation of the ranch’s 4,000 acres of pasture, bottomland, woodland, and riparian areas, and catalogued 500 species. Three hundred twelve vertebrate species are native to this region, including

One hundred species of birds, including

call this region home. Many of these can be viewed on the ranch.

Native pollinators including bumblebees, native bees, and flies are another key element of species diversity on the ranch.

Before European settlement, tall grass prairie communities containing bluestems, switchgrass, and other tall grasses dominated much of the broad valley. A wide variety of wildflowers and other plants also were present in great numbers. Prairie communities were often scattered between dry upland forests and bottomland hardwood forests that occurred along streams. Fire was an important factor in maintaining these communities.

Shortleaf pine savannas occupied ridge tops of this eco-region. Because these forests are an extension of those dominating the Ouachita Mountains, they are similar in structure and function.

Lush forests of oak, elm, and hackberry occurred along streams and rivers. These tall forests (about 100 feet/30 meters) usually had two or three other levels of trees in the understory, and often accumulated dense mats of leaves and other litter. Scattered clumps of low vegetation thrived in these heavily shaded forests except in openings, where a lush growth of herbaceous plants covered the ground. Grape, poison ivy, and greenbrier vines were common.*

Today much of the ranch is pastureland, dominated by bermuda grass and tall fescue, both introduced species. Remnants of the natural communities still remain on the ranch, and agroforestry and riparian protection projects have enhanced or restored others.

Throughout, the ranch retains its natural beauty. Crossing the Poteau River to the south side of the ranch, you can imagine you are entering another world, a world before fences and energy crises, a more spacious world of vast prairie, broken by forests of oaks and watered by shimmering oxbow lakes.

On summer evenings, comes the clamor of tree frogs, the buzz saw of cicadas, and the insistent call of the chuck-will’s-widow. There is the fragrance of pine in the humid air, along with the earthy smell of cattle. On a foggy morning, the shiny green fescue is as beautiful as the native big bluestem, and the cows emerging from the fog are as handsome as the deer, their bellows as startling as the bugling of elk.

The farm is a part of nature. That is an ancient, basic idea. But in modern, industrial agriculture, this view of the farm has been replaced by simpler models such as the farm as mining operation, where food is extracted, like gold, from the soil; or the farm as factory, where food is assembled, like a bicycle, from a few raw materials.

In 1986, the Kerr Center began to transform the Kerr Ranch from a well-managed conventional spread into a model sustainable enterprise, tapping into the natural cycles of abundant sun and rain in southeastern Oklahoma to grow grass and beef without relying on chemical fertilizer. In doing so, it became the only sustainable agriculture organization with livestock as a primary focus.

To make a ranch or farm sustainable, it must be viewed as a system. Farm as system: Webster’s definition of the word ‘system’ features terms such as ‘interrelated,’ ‘complex,’ and ‘whole.’

In 1989 a group of farm managers, ranch workers, and researchers, headed by Kerr Center president Jim Horne, collaborated on guidelines for evaluating the economic and ecological sustainability of the ranch and center projects.

These areas form the basis for the book written by Horne and Communications Director Maura McDermott, The Next Green Revolution: Essential Steps to a Healthy, Sustainable Agriculture, published in 2001 by Haworth Press.

Last month’s newsletter mentioned the installation of experimental water bars on some of the roads around the Kerr Ranch. Despite the sound of it, these are not swank joints where thirsty loggers and ranch hands can stop over to sample the waters of exotic streams – but they do help keep such streams’ waters clear…

Too Wet? Too Dry? Silvopasture Can Make it Just Right

An recent article on agroforestry served as an excellent illustration of the way that silvopasture can turn problem fields into prime pastures. The land in question, a floodplain site at a North Carolina State University research farm, had patchy soils with concentrations of both sand and clay. The sandy areas dry out quickly, especially under…

The National Agroforestry Center has developed a number of publications that describe the role agroforestry can play in supporting pollinators. “How can agroforestry help pollinators?” is a two-page information sheet that highlights opportunities to recognize, protect, and enhance pollinator habitat. “Working Trees for Pollinators” is a six-page color brochure that illustrates important pollinators for food…