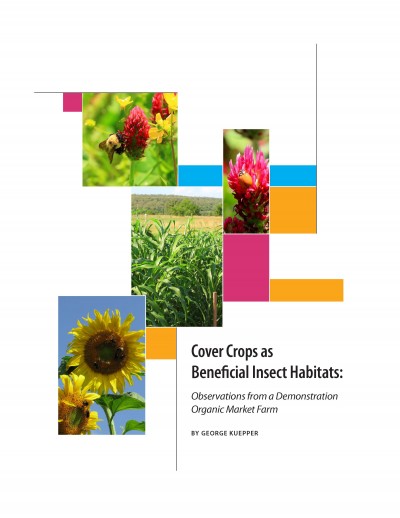 It also noted the fact that beneficial insects could and did use cover crops as habitat – and, though it was never a formal focus of investigation, the program developed ideas for enhancing that role, as well.

The project’s findings are summarized in the free report, Cover Crops as Beneficial Insect Habitats.

In general, cover crops provide the most habitat benefits when flowering. As such, the longer a given cover crop can be allowed to flower before termination, the greater the benefits to beneficials. However, this often favors using a single cover crop species rather than a mix, to avoid additional complications with timing of termination.

Similarly, short-season cover crops, like buckwheat and ‘Pink-Eye Purple-Hull’ cowpeas, flower sooner and are more suitable for providing habitat. Longer-season cover crops, such as ‘Iron and Clay’ or ‘Red Ripper’ cowpeas, do not flower as soon, and, though preferred for season-long weed suppression for that reason, will likely provide little if any habitat benefits.

Brassicas are another short-season cover crop species that can provide ample habitat early in the spring. However, they can only be used when early vegetables do not immediately follow them in the rotation – both because they are susceptible to the same soil-borne diseases, and because they provide habitat for a damaging pest, the vegetable weevil.

These are only a few of the ideas and examples contained within Cover Crops as Beneficial Insect Habitats. The report provides an excellent starting point for growers looking to further develop beneficial insect habitat as yet another application of cover crops.