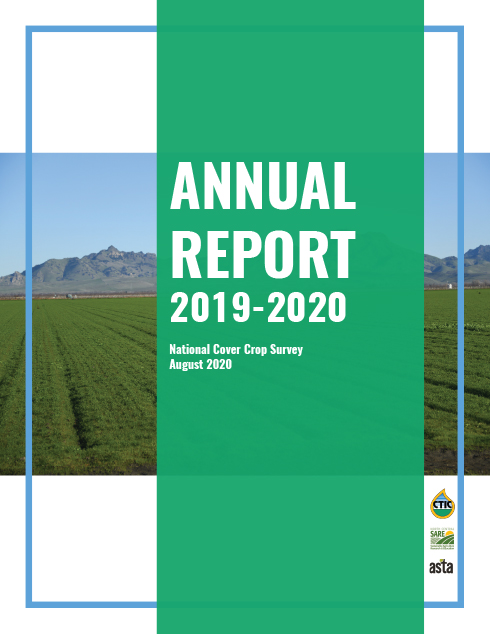 Despite the crippling rainfall that significantly delayed planting across much of the country in 2019, more than 90% of farmers participating in a national cover crop survey reported that cover crops allowed them to plant earlier or at the same time as non-cover-cropped fields. Among those who had “planted green,” seeding cash crops into growing cover crops, 54% said the practice helped them plant earlier than on other fields.

Those findings were among several new insights from the 2019-2020 National Cover Crop Survey, conducted by the nonprofit Conservation Technology Information Center (CTIC), with financial support from SARE and the American Seed Trade Association (ASTA). These organizations have worked together on several past national cover crop surveys, with the first survey dating back to the 2012 crop year.

“Many U.S. farmers have turned to cover crops as part of their strategy to improve soil health while reducing input costs and maintaining yields,” stated Mike Smith, who managed the national survey for CTIC.  Survey participants averaged 465 acres in cover crops in 2019, an increase of 38% in four years. The USDA Census of Agriculture found a 50% increase in cover crop acreage over the five-year period between 2012 and 2017.

“Farmers are using cover crops for a variety of reasons and many have tried new approaches to cover cropping,” Smith said. “This year’s survey also indicated that some of the concerns that many growers have had about the effects of cover crops on planting dates in a wet year turned out not to be true—in fact, in many cases, cover crops helped farmers plant earlier in the very wet spring of 2019.”

According to Rob Myers, Regional Director of Extension Programs for North Central SARE, “Many farmers are finding that cover crops improve the resiliency of their soil, and the longer they use cover crops, the greater the yield increases and cost savings that are reported by producers.”

“We are pleased to see farmers appreciate the expertise of cover crop seed companies with 46% saying they buy from them and another 42% buying from retailers,” said Jane DeMarchi, VP Government & Regulatory Affairs, ASTA. “Professionally produced cover crop seed is grown for seed from the start and has been selected, harvested, cleaned and tested for performance. The study shows farmers are using a range of cover crop seed and mixes to address their individual needs with 46% paying $15 or under per acre.”

Among the 1,172 farmers who provided responses in the 2019-2020 National Cover Crop Survey, 81% were commodity producers (corn, soybeans, wheat, cotton, etc.) and 19% categorized themselves as horticultural producers.

Here are some highlights from the survey. A full report is available free online at https://www.sare.org/news/2020-cover-crop-survey-report/.

The previous five national cover crop surveys sponsored by SARE, CTIC and ASTA have all reported yield boosts from cover crops, most notably in the drought year of 2012 when soybean yields were 11.6% improved following cover crops and corn yields were 9.6% better. In 2019, when wet early conditions prevailed across much of the corn and soybean regions, yield gains were more modest but still statistically significant. Following the use of cover crops, soybean yields improved 5% and corn yields increased 2% on average, while spring wheat yields improved 2.6%.

Many farmers reported economic benefits from cover crop beyond just yield improvements. Of farmers growing corn, soybeans, spring wheat, or cotton, the following percent had savings on production costs with fertilizers and/or herbicides:

Planting green refers to planting a cash crop like corn, soybeans or cotton into a still-living cover crop, then terminating it soon after with herbicides, a roller-crimper, or other methods. In this year’s survey, 52% of farmers planted green into cover crops on at least some of their fields. (In the 2016-2017 report, the most recent prior survey by SARE, CTIC and ASTA, 39% of the respondents had planted green.)

“The 2019-2020 National Cover Crop Survey shows that an ever-growing number of farmers of all types and in all regions of the U.S. continue to find advantages to using cover crops,” says Myers at SARE. “While the first survey in 2012 showed the benefits of cover crops in a drought year, this year’s survey showed that cover crops helped farmers in wet weather as well, with many of them being able to plant in wet spring weather when conventional neighbors couldn’t. The survey showed farmers are figuring out how to make cover crops work for them economically, while using them as a tool to address challenging issues such as herbicide-resistant weeds.”

For the full survey report and many additional insights on farmer experiences with cover crops, visit https://www.sare.org/news/2020-cover-crop-survey-report/.