In last month’s newsletter we talked about the surge in demand for locally raised beef that resulted from the COVID-19 pandemic. This month, to put that in context, we thought we’d take a look at direct marketing in general – both within Oklahoma, and in comparison with the situation nationwide.

The deepest look we’ve taken at the state of direct marketing in Oklahoma was in Closer to Home – 15 years ago now.  The Census of Agriculture data we used aren’t updated often enough to show any effects of the coronavirus pandemic yet, but they do show the trend against which any COVID-related changes would stand out.

Even without a pandemic thrown into the mix, the pattern over the last couple of decades presents some interesting puzzles. Back in 2006, when Closer to Home came out, the most recent data were from the 2002 ag census. From 1982 up until then, Oklahoma’s direct-marketing numbers had held relatively steady – both the volume of direct sales, and the number of farms participating – with no discernible long-term trend. Meanwhile, the nation as a whole had seen steady growth in the number of farms selling direct to customers since 1992, but total sales had been holding fairly steady.

Today, with another three ag census’ worth of data, the picture has changed. The nationwide sales growth that began in 1992 has continued – steadily for the most part, but with a slight plateauing between 2007 – 2012, and then a spike from 2012 – 2017. Farm numbers grew right alongside sales – until 2017, when they declined slightly for the first time in decades. 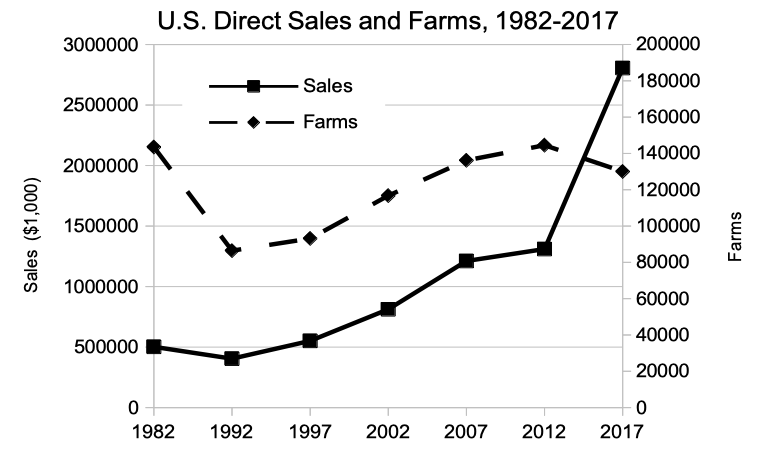 In Oklahoma, the pattern has been more muddled. Direct sales and farm numbers both increased sharply from 2002 – 2007. Since then, the statewide direct sales figure has never been less than $6 million, and the number of farms has not dipped below 2,000. Both have declined from their 2007 peak, however, and while sales recovered somewhat between 2012 – 2017, the number of farms remained roughly the same. 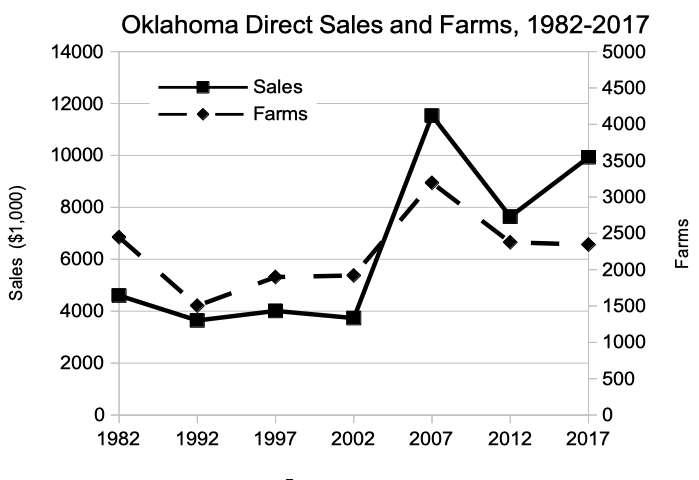 In broad strokes, then, Oklahoma’s position in direct-marketing relative to the nation overall is similar to its standing in the organic sector: a much smaller proportional slice, with slower and more halting growth.

Another broad trend that is common to both the state and national scales, with total sales rising but farm numbers falling, is that the average gross per-farm income is rising. Here again, that trend is more pronounced at the national level: from 2012 – 2017, average per-farm direct sales more than doubled, from $9,063 to $21,570. In Oklahoma over the same period, the increase was from $3,215 to $4,236. 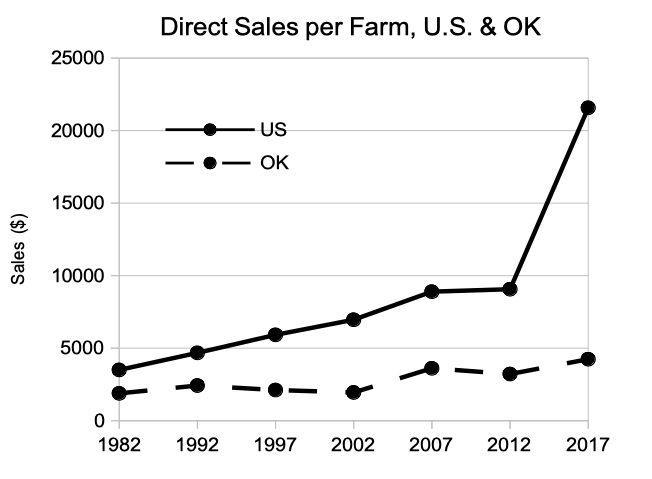 It seems clear from those numbers that, even nationwide, most farms with a direct-sales enterprise must not be earning the bulk of their daily bread from that alone. The direct-sales farms with the highest average income are also those with the highest gross sales – $25,000 annually and up – but even those are averaging only about $35,000, gross. By contrast, the median household income for the U.S. in 2017 was just over $60.000.

That may make direct marketing sound like a less appealing option, but it actually doesn’t differ so much from the agricultural sector as a whole. Of the slightly more than 2 million farms in the United States, less than half break even. Of those that turn a profit, only those with the highest sales – the 15% with gross annual revenues of $50,000 or more – average more than $36,000 in annual net income.

From that angle, direct marketing doesn’t look any less appealing than regular commodity farming or cattle ranching – and, as we pointed out back in Closer to Home, the field is still wide open for direct marketing to claim a larger share of the state’s – and the nation’s – food budget.

Don’t Spend It All in One Place! Who Is Pocketing Your Food Dollar?

How much of your food dollar, on average, makes it into farmers’ pockets? What can you do to increase that amount?

Vote for your favorite farmer’s market during the 2021 America’s Farmers Market Celebration, and help it win cash prizes!

A new study finds that transportation still accounts for a whopping one-fifth of the food system’s greenhouse gas emissions.