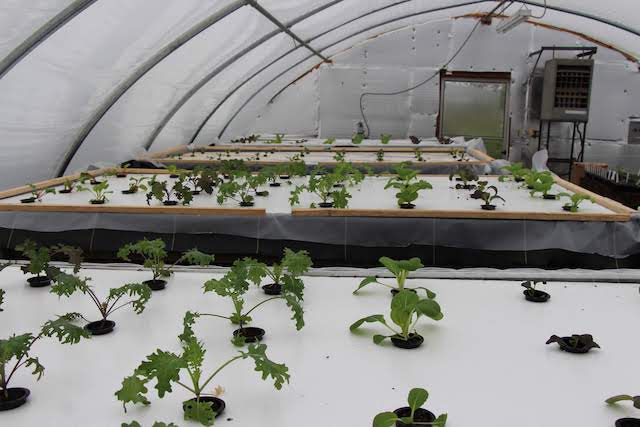 This system consists of a wooden frame lined with plastic to create a reservoir filled with water and nutrients. Rigid foam insulation board floats along the top, with holes cut for net pots and the plants to sit in. (See below for a video from the University of Florida/IFAS Extension, explaining the construction method.  Another option, instead of using a wooden frame with plastic, is to use pre-made plastic pools.)

It took two of our team members 90 minutes to plan and build the first frame. After the first frame and planning was done, the other frames took approximately 30 minutes each to assemble. This system really was a winner when time is considered.

We only had to water once, when we filled the beds with water and the fertilizer solution. While this took some time at the beginning, we were able to have two more grow sessions without switching out the water. So, for two succession plantings, we spent three hours filling all four of the frames we built. Each frame held between 80-90 gallons of water, with fertilizer added according to the label.

The spinach was not successful within the hydroponic system and would not grow past several inches. Spinach is a popular green for hydroponic systems, the most popular being NFT (nutrient film technique), DWC (deep water culture), and the Kratky method. Our assumption is that the spinach roots reached too far into the water, which caused less oxygen to be available for proper root growth, or that the plants would have been more successful within the 2-inch net pots where more soil was available. The lettuce thrived in both the 1- and 2-inch net pots. Swiss chard, kale, and pak choi all were successfully grown within the 2-inch net pots. Pak choi seemed to outperform all of the other crops grown.

The University of Florida video suggests adding Epsom salt (magnesium sulfate) along with the common fertilizer used. During this time, we were beginning another test using livestock mineral tubs filled with potting soil that utilized a reservoir in the bottom of the tub for self-wick watering. The system recommended adding Sea90 mineral salt. We inadvertently added the Sea 90 mineral salt instead of the Epsom salt in two of our hydroponic beds. This made the plants taste salty. The solution for the second planting was to dilute the treatments with fresh water. The second crop did not taste salty.

We had used one other fertilizer from HortAmericas called Pre-Empt. This is an organic fertilizer that is said to have all the nutrition needed for hydroponics in one bottle. It worked as well as the other treatment. One drawback is the cost. Pre-Empt was fairly expensive, and we only had enough for two of our frames.

A predominant problem with using this type of system is the presence of algae. Light is the main factor for algae growth, and it is imperative that the insulation board cover all of the water.

The horticulture program will continue its exploration into hydroponics this fall, along with a comparison crop grown in containers filled with soil. Those observations will be discussed later this year.