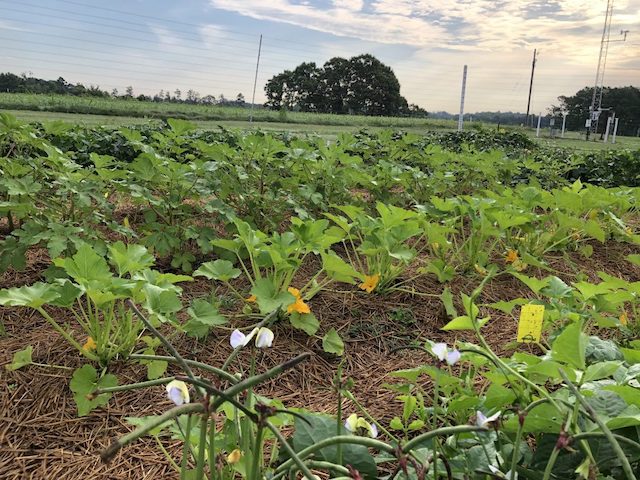 Newly published research reveals that intercropping cowpeas with vegetable crops can boost yields, as well as drawing larger numbers of pollinators to fields.

Yield increases from intercropping with cowpeas ranged from 7% in okra to 27% in squash to 54% in watermelon.

Researchers at North Carolina A&T State University conducted the study with support from a Southern SARE Research and Education Grant.

To start, the project evaluated twenty-five cowpea varieties for suitability as intercrops, measuring things like pest and disease resistance, nodulation efficiency, and chlorophyll content, as well as yield. They also counted pollinators.

The top performers, selected both for these measures and for customer preference, were Whippoorwill and Pinkeye Purple hull. (Pinkeye Purple hull was also a mainstay of the warm-season cover-crop lineup in the bio-extensive rotations on the Cannon Horticulture plots.)

The second phase of the project consisted of actual intercropping trials using those two varieties, with the vegetable crop yield increases noted above. In addition to that production boost, pollinator numbers in the intercropped plots were 50% higher than in monocropped ones.

Beatrice Dingha, the professor heading the project, points out the multiple advantages of cowpeas relative to some other cover crops.

“Cowpea can allow producers to grow two marketable crops in a field. At the same time, cowpea attracts more pollinators and fixes nitrogen in the soil. Cowpea is an overlooked crop for intercropping programs,” Dingha explained.

One additional interesting finding was that, in the original setup, the cowpeas flowered at a different time than the cash crop. When planting dates were adjusted so that everything flowered at the same time, results improved. This finding extends observations made during the Kerr Center horticulture program’s early explorations of using cover crops as habitat for pollinators and other beneficial insects.

This article from Southern SARE summarizes the project results in more detail. The full report is available here.

This article is from the August 2021 issue of the Kerr Center newsletter, Field Notes.
< Previous article

Which Pumpkins to Pick?

Which pumpkins to pick? This heirloom pumpkin variety demonstration can help – and it includes observations on no-till organic farming.