Legumes Lead the Way to Lower Water Use in Livestock Production 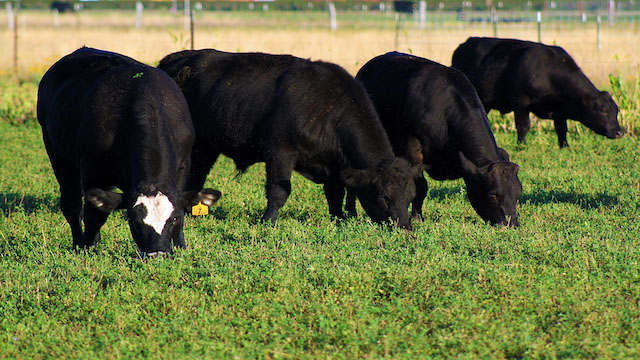 While flood control structures play an valuable role in saving soil when the rains come too thick and fast, leguminous crops with a reputation for deep thirst may prove key to helping livestock producers make better use of water when drier times inevitably return.

In the western part of the state, with intensive irrigation driving the decline of the Ogallala Aquifer, that’s bound to ring even truer over the long term.

With that trend in mind, researchers at Texas Tech University have been looking at alternative agricultural production systems for the region, comparing the currently dominant cotton monoculture to diversified crop/livestock systems.

One finding that stands out is that forage-based livestock production requires less water, both for irrigation and livestock use, than row crops. In addition to conserving water, such a transition builds soil organic matter, stabilizes soil from wind erosion, and diversifies income.

The research design featured two innovations: adding perennial legumes to the forage mix, and creating a limited-acreage “protein bank”, consisting mostly of alfalfa, which was rotationally grazed on a limited basis.

These novel aspects upended the traditional image of alfalfa as a water-intensive crop. “That is true when managed as a hay crop when pushed to its high-yield potential,” said forage systems researcher Chuck West. “The other face of alfalfa is that it is a very deep-rooted, drought-resilient plant which can lay dormant during dry summers and recover after periodic rains. The soils of the Texas High Plains favor such a crop.”

Over the three years of the study, irrigation was limited to 8 inches in the the grass-only pastures, and 7 inches to the grass-legume mix. The grass-legume mix required around 30 percent less water to produce a pound of beef live weight gain: 287 gallons of water per pound of gain in the legume-grass mix, as compared to 395 gallons per pound on grass alone.

For lower-than average precipitation years (or years with above-average but unevenly distributed rainfall), this research points to a 9 to 12″ irrigation rate as a reasonable target range. In the same region, cotton requires an average of 12″, and corn, 18″.

“Our realization of 7-8 inches of irrigation indicates progress in providing a viable land-use option for cropland whose irrigation systems can no longer provide irrigation at high-yield levels,” said West.

The take-home message is that boosting forage quality by adding legumes to drought-tolerant grasses while keeping water inputs low boosts the sustainability of water use in a beef grazing system.