Livestock Welfare and Performance in Silvopastures 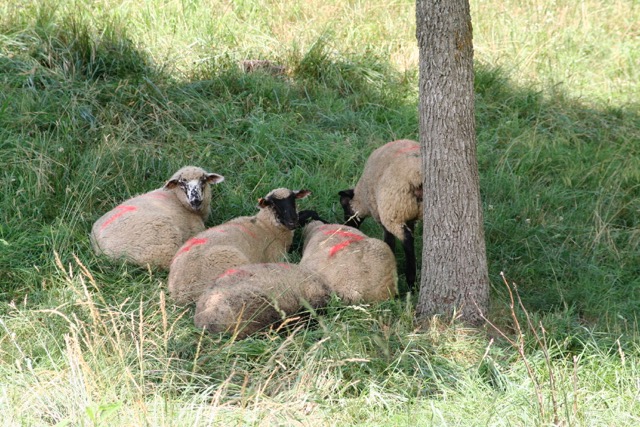 via the Association for Temperate Agroforestry:

One benefit commonly claimed for silvopasture is that livestock grazing in hot weather will gain more weight in pastures with trees than in full sun. This is because they can graze, or at least rest, in the shade, reducing their heat stress and putting more of their food energy toward growth.

However, most studies only measure the weight gain, not the change in heat stress.

A recent study at Virginia Tech measured both effects. Even though the pastures with trees had about a third less forage than the open ones, lambs grazing in both treatments gained about the same amount of weight.

The standard explanation would be that the lambs with access to shade didn’t have to spend as much energy putting up with the hot weather. Using cameras and body thermometers, this study actually documented evidence to back that up. Lambs in the black walnut pasture spent more time lying down than those in the open pasture. They also grazed more often and more evenly throughout the day, tracking the shady patches across the pasture, and had lower body temperatures.

Researchers aren’t certain, but there may be a clue in the fact that their temperatures didn’t stay as low – especially in August, the hottest month of the summer, when the honey locust trees were losing some of their leaves.

The same team plans to look at similar questions with cattle in upcoming research.

Speaking of agroforestry, recent research has opened two different paths to combining it with cattle grazing to keep carbon budgets balanced. We’ve long touted the benefits of silvopasture – combining tree plantings and cattle grazing on the same land. Cattle have better access to shade in summer and shelter in winter, and gain weight faster…

There are a variety of free and low-cost trainings available to help would-be fire managers learn how to conduct prescribed burns safely.