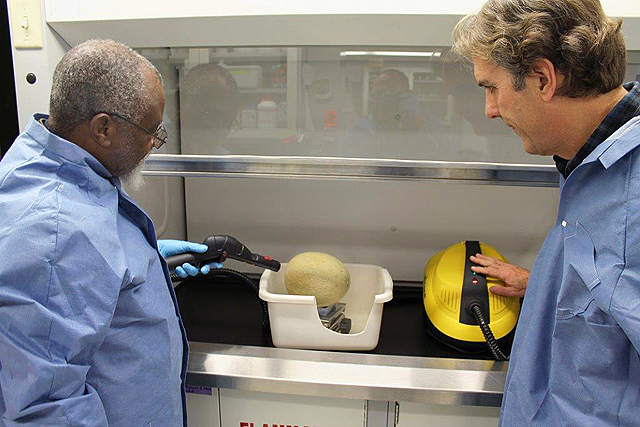 Dike Ukuku and his colleagues at the ARS Food Safety and Intervention Technologies Unit in Wyndmoor have demonstrated that a relatively inexpensive steam cleaner (designed to remove wallpaper and clean outdoor grills) can rid cantaloupes of E. coli, Salmonella, and Listeria more effectively than existing washes and chlorine treatments.  The technique produced sufficient heat to kill surface pathogens, but not enough heat to damage the fruits.

The ARS study involved submerging cantaloupes in a bath inoculated with E. coli, Salmonella and Listeria strains. After drying and refrigeration, the cantaloupes were cleaned with a commercially available power steamer….

Processors and distributors could apply steam when cantaloupes are put into washers or as they are moved on conveyor belts during processing, Ukuku says. The technique also may effectively sanitize watermelons, honeydews, cucumbers and baby carrots.

The new technology could reduce the number of foodborne disease outbreaks from contaminated produce, which annually cause nearly one million illnesses and more than 100 deaths.

Read more about this research in the March 2017 issue of AgResearch.