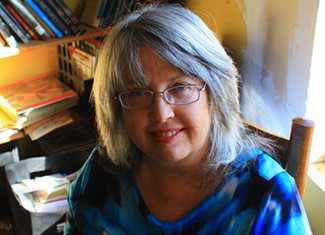 Maura McDermott was Communications Director for the Kerr Center from 1998 through her retirement in 2015.

Maura grew up in south Florida, but after nearly forty years in Oklahoma, considers herself an Okie.

Before joining the Kerr Center, Maura was a contributing editor and award-winning writer for Oklahoma Today magazine. She also taught high school and college English. Her college education includes a B.A. in Journalism from the University of Oklahoma, and several teaching certifications from Northeastern Oklahoma State University in Tahlequah. She has lived in Thailand and Indonesia and travelled extensively in Asia.

It was a good partnership. In 1997, Maura began working with Horne on a co-authored book, The Next Green Revolution: Essential Steps to a Healthy, Sustainable Agriculture. Published in 2001 by Haworth Press (now CRC Press), the book has been through four printings, most recently in 2012.

In 1998, Maura officially joined the Kerr Center as Communications Director. In that role, she was responsible for the center’s website, newsletter, and public relations, as well as publication production and multimedia.

Maura managed a complete overhaul and upgrading of the Kerr Center website, as well as developing the Center’s presence on social media, constantly keeping abreast of new developments in digital communications. She developed the newsletter into a professionally published, high-quality publication with over 8,000 subscribers, and oversaw the newsletter’s transition to electronic format in 2015.

Maura also edited numerous Kerr Center publications over the years. In 2015, she and current Kerr Center President David Redhage co-wrote Native Plants for Native Pollinators in Oklahoma. In the same year, Maura also wrote the Kerr Center’s Guide to Native Milkweeds of Oklahoma, providing critical information for the conservation of monarch butterflies in the state.

After her retirement, Maura and her husband, Ron Wood, remain on the Wood family farm near Checotah, where they enjoy gardening and amateur astronomy.