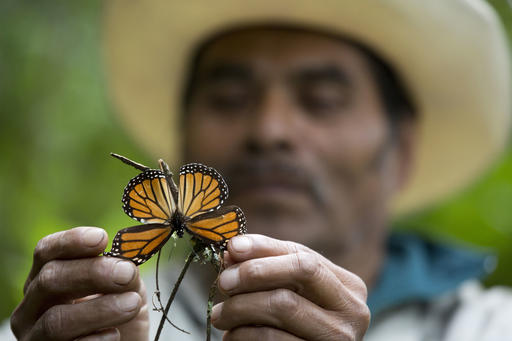 The number of monarch butterflies wintering in Mexico dropped by 27 percent this year, reversing last year’s recovery from historically low numbers, according to a study by government and independent experts released Thursday.

The experts say the decline could be due to late winter storms last year that blew down more than 100 acres (40 hectares) of forests where migrating monarch butterflies spend the winter in central Mexico.

Millions of monarchs make the 3,400-mile (5,500-kilometer) migration from the United States and Canada each year, and they cluster tightly in the pine and fir forests west of Mexico City. They are counted not by individuals, but by the area they cover…

Officials estimate the storms in March killed about 6.2 million butterflies, almost 7.4 percent of the estimated 84 million that wintered in Mexico, said Alejandro Del Mazo, Mexico’s commissioner for protected areas. The monarchs were preparing to fly back to the U.S. and Canada at the time the storm hit.

While no butterfly lives to make the round trip, a reduction in the number making it out of the wintering grounds often results in a decline among those who return the next year….

Read the rest of this article on phys.org.

See the Kerr Center’s resources on preserving pollinators and their habitat.

The Tulsa World has a story on how the Oklahoma Department of Transportation has been trying out different roadside mowing schedules to find out which work best to keep milkweed plants available for monarch butterflies at the right times of the year. Read the story.