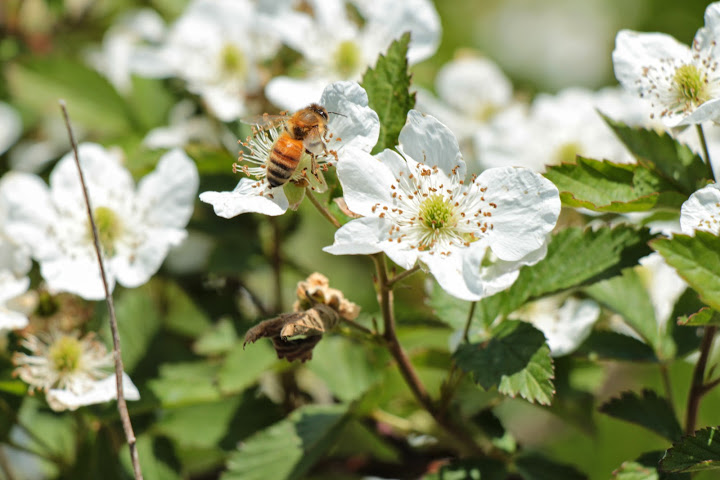 Neonicotinoid pesticides, or neonics, rank high among the many threats facing honeybees – so high that the European Union has banned three of the most widely used ones outright. Now, though, it turns out that these chemicals may be hooking the bees as well as hurting them.

Most studies of neonics’ impacts on bees simply feed the bees a diet of sugar water spiked with the pesticide. Recently, though, researchers from Imperial College London tried a different technique: offering bees a choice between sugar solutions with and without the added pesticide.

The study was meant to determine whether bees could recognize and avoid neonic contamination, and initial results indicated that they could, and did. Over time, though, the bees actually began to visit the pesticide-laced feeders more often than the unadulterated ones – even when the researchers switched up the locations of the feeders.

Rather than recognizing and avoiding the toxic pesticide, the bees were actually seeking it out.

Neonicotinoid sounds like “nicotine,” and the molecules also resemble each other’s chemical structure. Now it appears that neonic-contaminated nectar is habit-forming for bees in a way similar to how nicotine makes it hard for humans to quit smoking.

If there’s a silver lining around the cloud neonics have thrown over honeybees, it’s been revealed by other recent research, showing that much of the time, neonics simply aren’t needed.

Most neonics are applied as a seed coating, rather than sprayed on plants after the crop has germinated. Back in the day of spray, corn growers often did without – but since neonic seed coatings became available, the vast majority of corn seed planted has them.

Researchers from universities all across Europe recently published a study showing that most of the time, the cost of crop losses to insect pests in cornfields planted without neonic seed coatings is less than the cost of the coated seed itself. In fact, neonic seed coatings made financial sense on only about 0.2% of corn acres in the study – and of that tiny proportion, management practices could do as good or better than the insecticide on 4/5 of the acreage.

That could have been due to specific conditions in Europe – but later research in the U.S. found much the same result.

Why are farmers spending more for neonic-treated seed when it’s addicting the pollinators we depend on to substances that poison them? It could be simply because many seed companies don’t even sell untreated seed anymore.