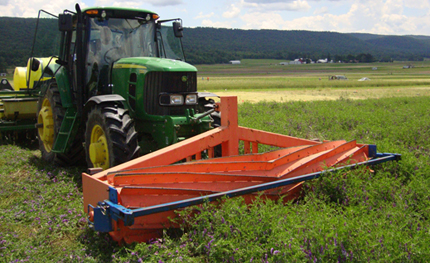 from the American Society of Agronomy, via ATTRA:

Clair Keene, a researcher at The Pennsylvania State University, and her colleagues wanted to find the perfect time to crimp-kill a cover crop: grown long enough to make biomass adequate to suppress weeds, but not far enough along to make seeds.

They planted an experiment in three different states: Delaware, Maryland, and Pennsylvania. For three years, they planted cover crops of hairy vetch-triticale and cereal rye, followed by cash crops like corn and soybeans.

The researchers flattened the cover crops at different stages of growth to find the best timing.  Generally, letting the cover crop grow longer produces the best, if not perfect, results.

Each cover crop has its own sweet spot. In the study, crimp-killing cereal rye in the middle of grain fill squelched seed production. Hairy vetch could often survive the roller  crimper and rebound to compete with cash crops.  Rolling the cover crops twice instead of once helped to ensure a thorough kill.

Despite the tricky timing, Keene says rolling cover crops to form a mat has a lot of potential. Without it, “you’d have to plow the field multiple times, harrow it, plant it, and do a lot of weeding,” she warns. “That’s a lot of time in the tractor and a lot of diesel fuel.”

Detailed results of the study were published in Agronomy Journal.