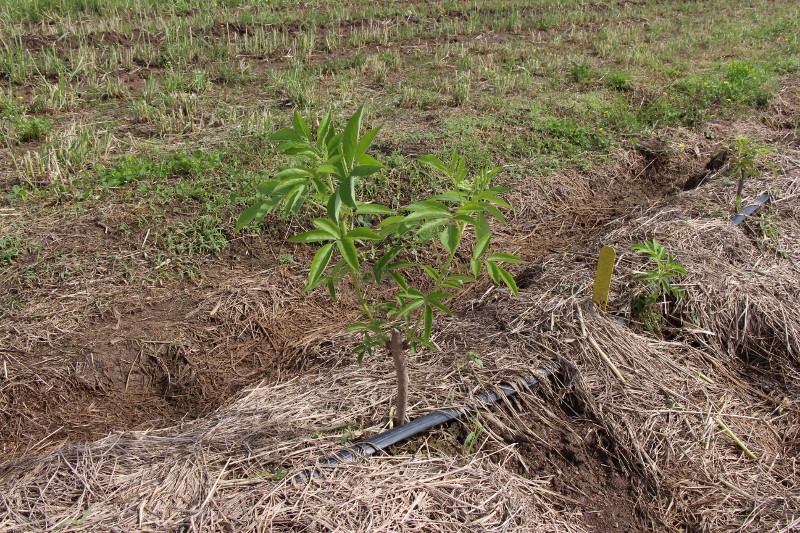 After several years of large-scale demonstration work for the Beginning Farmer Program and Resilient Farmer Project, the horticulture program is shifting gears.

Three of the four fields in the Cannon Horticulture Plots will be moving into permanent cover crop rotations, and perennial crops will begin to occupy a share of space in the remaining fourth field.

In “Market Farming with Rotations and Cover Crops,” Kuepper outlined ideas for incorporating perennial crops into the bio-extensive rotation used on the Cannon Plots. The first of those plantings are now in the ground: a row of elderberries. (Be sure to sign up early for the elderberry workshop in September.) A nearby bed boasts asparagus, flanked by beds of warm-season annual cover crops.

Cover crops can provide a bonanza for pollinators and other beneficial insects, but one that is often short-lived, as most annual cover crops need to be terminated before they finish flowering and set seed.

One advantage to perennial crops is that they allow for the presence, in the field, of plants that provide more lasting habitat for pollinators and other beneficial insects. As an example, the ends of the elderberry rows are planted with eastern gamagrass to create a “beetle bank.”

Outside the cropped areas, the Cannon plots’ conservation buffer strips provide a more extensive area for perennial pollinator plants. That potential can be enhanced by some simple tricks – such as mowing around certain pollinator-friendly plants, like yarrow, until their flowering period is complete.

A few years back, the horticulture program tried a variation on the Native American “three sisters” polyculture of corn, beans, and squash. Following on from that, one area of the Cannon plots is now beginning a “four sisters” trial, with squash as the fourth member.

This publication outlines thoughts on, and experiences with, using cover crops as beneficial insect habitat in organic farming.