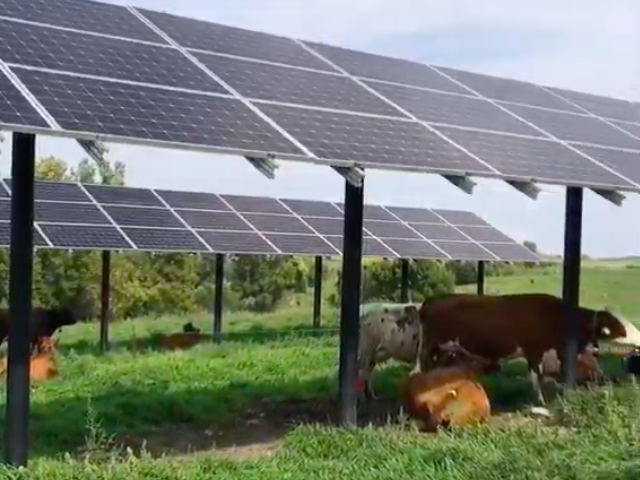 By now most of us have gotten pretty well accustomed to seeing images of cattle grazing beneath giant wind turbines, illustrating the idea that agriculture and renewable energy generation can go hand-in-hand. Now, new research is showing that solar panels can have similar synergies when planted in pastures – or even, paradoxically, over crops.

When solar panels get too hot, they don’t work as efficiently. Installing them over vegetation helps keep the panels cooler, because of the continuous flow of water vapor exiting the plants’ leaves.

However, if the vegetation gets too tall, it can shade the panels. That’s where the synergy with livestock begins. Grazing animals can keep the plants from getting high enough to shade the panels. The animals themselves, meanwhile, can also use the panels as shelter from the sun.

This idea has become widespread enough that an organization has even sprung up to promote it – the American Solar Grazing Association. Its website mentions that it was founded specifically “to promote grazing sheep on solar installations.”

Sheep and goats are more common in agrivoltaic applications, simply because they’re smaller, and the panels can be mounted on shorter frames. Solar installations in cattle pastures require higher and sturdier mounts – but though they may be less common, they’re on the rise as well. They can be a particularly good fit for dairies.

One Vermont dairy installed 95 KW of solar generating capacity, aiming for net zero energy. The project was paid for with a $255,00 loan from the state agricultural credit corporation, a $36,000 state renewable energy rebate, and roughly $25,000 per year in net metering income (from the utility company paying the farm for excess energy supplied to the grid). The investment was estimated to pay itself off in 6 years, with ongoing free electricity from that point forward.

However, even for operations without access to that kind of cash or credit, agrivoltaics can offer profit-making opportunities. Renting ground for PV panel installations, similar to leases for wind turbines, is one option.

Another is renting the animals themselves. In these arrangements, the grazier transports the animals to a PV installation site and supervises their grazing for a fee. This is attractive to utility operators, since managing vegetation with grazing animals cuts labor time by up to 2.5 times versus mechanical or chemical methods. The appeal to the grazier is in the additional forage acres.

Researchers at Oregon State University found that the economic returns from grazing sheep on pastures with solar panels were slightly lower than in traditional pastures – $1,029 per hectare vs. $1,046 – but that didn’t take into account the value of the electricity produced.

The same study found that forage production decreased in pastures with PV panels – as expected, since more shade means less plant growth. However, the nutritive value of the shade-grown forages increased enough that there was no difference in the animals’ weight gain between the two treatments.

That observation is the source of much of the latest buzz around agrivoltaics in crop applications. Recently published research found that, for some crops, productivity actually increased in the shade of solar panels. Leafy greens, like lettuce and kale, act exactly like the forages in the above study, growing larger leaves to capture more of the diffuse sunlight in the shade of the solar panels. Those larger leaves increase the amount of marketable product.

Not every crop, in every region, will grow better in the shade. However, even sun-loving crops, like tomatoes and peppers, can use a break from the peak summer sun. At the Kerr Center, we’ve used shade cloth to tackle that issue. In hot, dry, Arizona, one researcher documented double the production of tomatoes under solar panels’ partial shade versus their sun-soaked companions – while cutting water use by 65%. Jalapeño peppers had the same production under both treatments, but the ones in the shade of the PV panels had 157% greater water use efficiency.

These signs of compatibility between solar panels and crops and livestock on the same acres are good news indeed for agrivoltaics. With solar electricity predicted to expand its contribution to the U.S. energy production portfolio to as much as 30% by mid-century, utility-scale PV installations will need vastly expanded acreage.

If some of that space can come from farm and ranch lands, without reducing their productivity – or even enhancing it – that would help to clear a major hurdle. According to a University of Oregon researcher, if 1% of U.S. agricultural land hosted agrivoltaics installations – 13,000 square miles, about the size of Maryland – it would satisfy 20% of total U.S. electricity consumption. The project he envisions would pay off its $1 trillion-plus cost in 17 years, halfway through its intended lifespan.

If agrivoltaics can deliver on promises like that, it may well represent a path to a truly green future.

This article is from the September 2021 issue of the Kerr Center newsletter, Field Notes.
< Previous article – Next article >

A new guide to setting up a small-scale meat processing facility, So You Want to Start a Meat Plant?, is available free online.

The National Center for Appropriate Technology has released a series of 19 videos from its inaugural Soil Health Innovations Conference.

Fall armyworms are on the march! Learn how to recognize this seasonal pest and prevent it from damaging crops and forages.