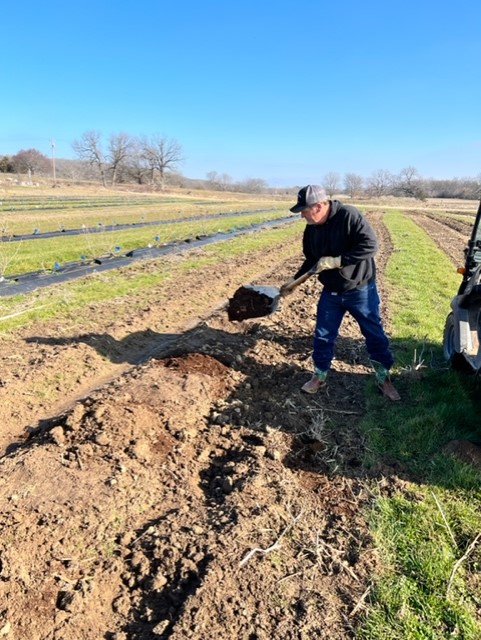 The Kerr Center has worked with blueberries over the years. We had a U-pick operation in the early 1990’s. Later we held workshops promoting blueberries for u-pick operations. It has been over ten years since the last blueberry planting was removed.

After some research, we realized several new varieties have been introduced. We also realized our climate has changed enough that we may be able to successfully grow rabbiteye blueberries, and possibly some of the older highbush varieties.

We decided to select some of the new varieties and include some industry standards and older highbush varieties to plant at the horticulture farm. This will allow us to evaluate them, and visitors to see how the new varieties perform in eastern Oklahoma.

We have prepared the plots, building raised beds last fall. We dug holes where the plants will be planted and added peat moss, pine bark mulch/nuggets, and compost. This should give the blueberries a good start. They will be irrigated as well.

It is exciting for us to revisit blueberries. In the past we grew large plantings to demonstrate the U-pick potential with one to three varieties. This time we are evaluating a large number of varieties for viability in our area.  Hopefully in three to five years we will have information to report on this project.