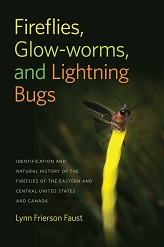 Fireflies, Glow-worms and Lighting Bugs: Identification and Natural History of the Fireflies of the Eastern and Central United States and Canada. Lynn Frierson Faust. University of Georgia Press. 2017. 356 p.

Fireflies or lightning bugs – take your pick of the name – have interested me since childhood. I know many of you probably have memories of chasing fireflies in the early evening. It reminds me of time spent at my grandparents’ house literally over the hill from my childhood home.

I remember one evening on my family’s farm. Dad and I had just finished baling straw in a fifteen-acre bottom. It was a warm summer, evening between nine and ten o’clock. We had three loads of straw. Dad took one load to the house, leaving me in the bottom to wait for him so I could help hook up one of the wagons.

I climbed up on the hay wagon and lay down on the straw bales. It was cool in the bottom, with very little breeze. Suddenly I realized there were fireflies all around me. I sat up and looked across the dark bottom field, seeing thousands of fireflies flashing in every direction! It was a beautiful sight that I remember to this day.

No one is really sure why fireflies are declining, but it does seem to be related to habitat loss, land management, and lights at night. I have been working on issues associated with native pollinators, and both habitat loss and land management affect them.

Fireflies, however, are also affected by lights at night. It seems that our need to light up the outdoors at night inhibits fireflies’ ability to reproduce, since males have trouble locating females due to light pollution.

Chapters One through Seven cover many of the basics about fireflies. Chapter Three is my favorite, covering frequently asked questions. I was surprised how much I learned in that one chapter. The balance of the book is in Chapter Eight, and covers the species broken up by genus.

Most individuals will find the first chapters the most helpful. If you really want to work on firefly identification, Chapter Eight is where you need to focus. It is more scientific in nature, but there is still a wealth of information about where to find different species.