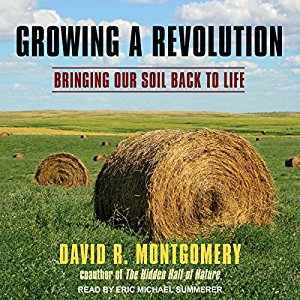 This is a followup to a president’s note from May 2016. In the president’s note, I wrote about a book from author David Montgomery, entitled Dirt. The author has just released another book, entitled Growing the Revolution: Bringing Our Soil Back to Life.

In this book, the author travels to farms in different parts of North America, and even visits Africa and Central America, to see how innovative farmers are using different techniques to improve the soil, reduce erosion. and produce a viable crop. While I am familiar with many of the examples he covered from North America, the tropical examples were intriguing. No-till systems were working very well in those climates.

One thing became clear: most of the techniques were region/climate/site specific. What does this mean? It means that while the basic concept of year-round cover on the soil and no-till systems was the universal preference, the crop and livestock mixes, along with timing of planting and harvest, were dependent on the location and how the farming operation was managed.

In the upper central plains of North America, livestock combined with cropping and very diverse cover crop mixes seem to be providing the most rapid soil improvement response. Moving into the Midwest, some growers were improving soil without including livestock, while others were including livestock and seeing soil improvement. The tropical examples were focused on small-scale farming operations and required constant ground cover due to high rainfall events and high biological soil activity.

The book also pointed out how more attention is being paid to what is happening in the soil biologically. We know so little about how our farming practices are affecting soil microbial life and the subsequent impact on crops and our health. I have watched this movement for years, and finally science is catching up.

I have also seen recent studies which seem to indicate cover crops don’t have as much benefit as some producers are claiming, but most of the producers I have read about or heard talk are using very diverse cover crop mixes. The scientific studies focus on using one or two cover crops, but the growers are experimenting with mixed cover crops planted together along with diverse cash crop rotations.

One universal truth seems to be a transition period of about three years for the soil to adjust when switching to a no-till system. As a result, yields seem to drop before climbing back up. The author suggests a federal program which would pay farmers during the transition phase to maintain farm income until the yields come back.

While I am familiar with most of the topics covered in the book and have seen this movement focusing on soil health evolve over time, it is nice to find the information in one location. I can recommend the book to those not familiar with the direction growers and innovative researchers are taking the topic of soil health. It again shows growers taking the lead in trying to improve their farming operations.