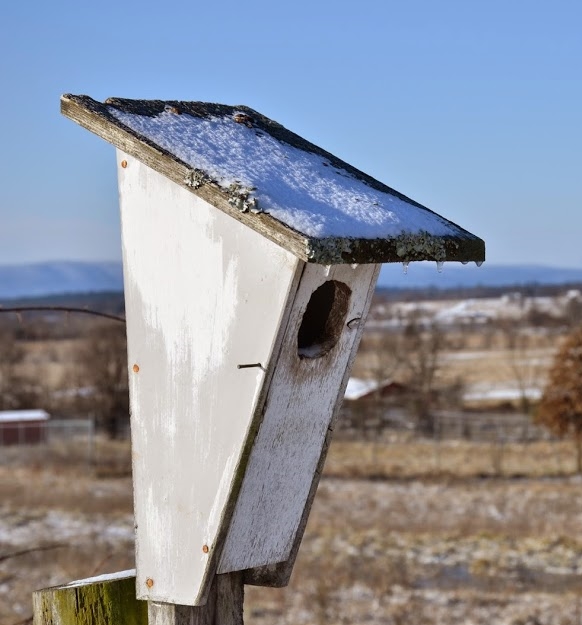 Attracting certain bird species by landscaping or using birdhouses can help with insect control and be a fun family project. Some birds can be a detriment, such as red-winged blackbirds in sunflowers, or the aggressive English sparrow driving off other birds. The eastern bluebird (Sialia sialis) is one species that can be beneficial and are readily attracted to man-made bird houses.

I was a member of 4-H as a kid and one of my areas of interest was woodworking. I started early making bluebird houses in 4-H woodworking classes. Bluebirds are cavity nesters. Due to the way we manage our landscapes, there can be a lack of natural nesting sites in some areas. I have seen bluebirds nest in open front bird feeders and under the lid of a propane tank. Bluebirds will readily build nests in appropriately designed bird houses.

The first houses I made were the standard rectangular box with a perch on it. There are several issues with the house design. The roof was held in place by a wood screw, and to clean out the house you needed to remove the screw to take off the top. Over several years, the screw would loosen. The perch invited English sparrows (Passer domesticus). English sparrows and snakes were the nemesis of nesting bluebirds. If the sparrow found the box first, it would build a nest and keep bluebirds away. I was constantly removing sparrow nests from my bluebird houses to discourage them. If there was a bluebird nesting in the box, sometimes the sparrow would kill the bluebird and take over the nest box. If the house was mounted on a tree or wooden post, snakes could climb up and kill the nesting bluebirds.

Several years after I started working at the Kerr Center, I came across a study of bluebird house nesting success rates. The study documented a high success rate with a house design called the Peterson Style bluebird house. I tracked down the plans and made several houses. They have been the most successful design I have used. The first one I put up was near the Kerr Center front office door. By the time I walked back to the office and turned around, a male bluebird had claimed the house!

There are several key differences between the box style and the Peterson style. The Peterson house is designed with angles, there is no perch on the house, and the clean out is the front panel held in place by a finish nail inserted by hand. Due to the required cutting angles, you need some woodworking experience to build it. The only weaknesses I have found are that it attracts wasps underneath the floor, it can attract ants, and due to the design it is heavy. I have never seen an English sparrow in the houses. I did mount the houses on wooden posts, which is not the best location to avoid snakes. There are mounting post designs using metal poles with a guard underneath the house to prevent snakes from climbing up.

There are some newer designs which seem to compete well with the success rate I have seen with the Peterson design. Those are the Gilwood, Gilbertson, and Troyer bluebird houses. I have not tried any of these designs, so do your own research on their effectiveness. The cutting angles on the Gilwood design are square, so it should be easier to cut out. I have included some web links which provide more information on building bluebird nest boxes so you can find building plans for the houses mentioned. There are also several state bluebird organizations with websites. Good luck and have fun!