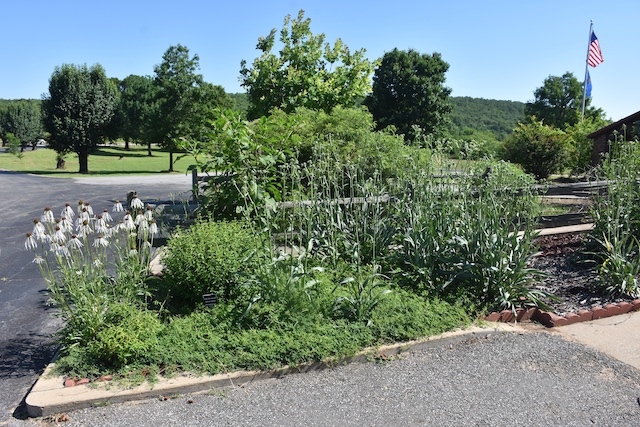 I have been working for several years with native plant landscaping to develop pollinator habitat around the Kerr Center office. One thing I have learned is to have patience with native plants as they establish. Over time, the landscape will naturalize, and the perennial plants seem to become more attractive to pollinators as they become established.

The photo I have included is a bed going up the walkway into the Kerr Center entrance. There are currently six native species in the bed:

The only one purchased at a nursery was the St. John’s wort; however I did find some growing naturally on the Kerr Ranch. I collected seed from rattlesnake master, yellow puff, and pale purple coneflower. The rattlesnake master and the low-growing yellow puff were planted in the bed as potted plants. The coneflower originated from a bed nearby, where I have a collection of Echinacea species planted. The pokeweed and false dandelion came up on their own.

The rattlesnake master has naturalized over several years, and it took three years before pollinators started using it heavily. Now it is absolutely covered with pollinators when in bloom.

The yellow puff has been recommended as a potential groundcover, which is why I planted it in the bed to see how it would do. It did fine for several years, but I really thought it had limited potential as a groundcover until the last two years. It seems to have settled in and is now looking good, especially with the taller plants.

The plants that originated as seeds collected on the Kerr Center Ranch seem to naturalize more easily. I have always advocated collecting or sourcing native plant seed, or plants grown from seed, near where you live, as having the highest chance of success when grown in your landscape. It seems to hold true for this bed in the Kerr Center landscape.

Many people don’t realize the important role wasps play as pollinators. This guide for eastern North America helps to fill that gap.