President’s Note: Western Monarchs – How Bad Can It Get? 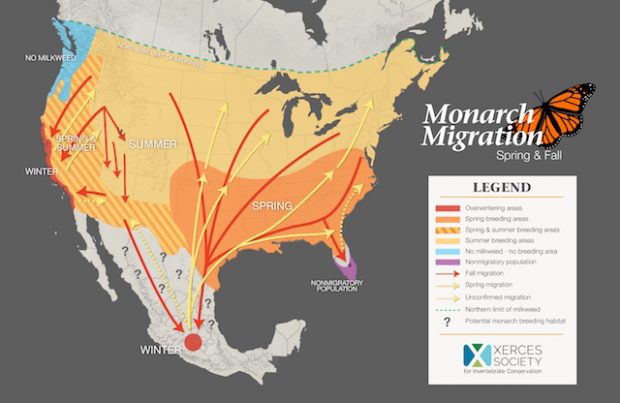 The monarch butterfly is facing challenges in maintaining its population in North America.  Part of the issue is overwintering sites.

There are two main migratory routes for North American monarchs.

Monarch butterflies from the Rocky Mountains to the east coast migrate to a site north of Mexico City.

Western monarchs migrate to several locations along the California coast.

To show how bad it can be, the preliminary count data from the West Coast monarch count showed an overwintering population of around 30,000 this year.  Some research shows that this is the potential extinction point for this population!

According to the Xerces Society, the population was over 1.2 million in 1997, while counting fewer sites along the California coast.

The central North American population is doing better, but it is still at very low numbers.

While awareness of the plight of the monarch is high, we still need to do more.  We are in danger of losing an iconic North American butterfly.

Those in Oklahoma can check out the Kerr Center website for information on pollinator habitat, and the Okies for Monarchs website to learn what you can do specifically for monarchs.

Posted On 12/04/2015
Keep Oklahoma Beautiful recognized the Kerr Center with its 2015 Environmental Excellence Award, in the category of nonprofit organizations serving the entire state. The award…

How Quickly Will Cover Crops Pay for Themselves?

A new SARE publication makes it easier to calculate how long it will take cover crops to pay for themselves – and offers tips to make it happen sooner.

In 2018, Princeton University Press released an updated 2nd edition of Garden Insects of North America, with over 700 pages and more than 3,000 full color plates. If you wanted one book to help identify garden insects, this is it.