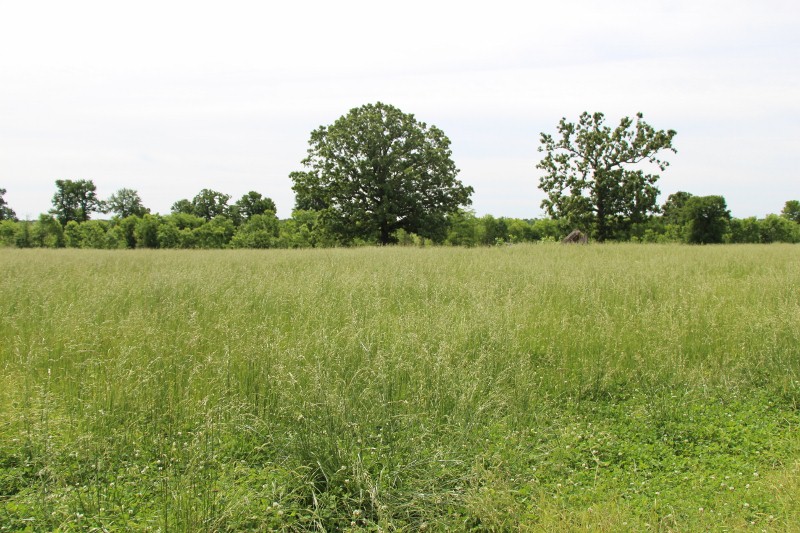 Many pastures on the Kerr Ranch are currently knee-deep in fescue, with seedheads nodding at waist height and thick stands of clover coming into white blossom beneath. The only thing missing from the picture is the cattle.

Part of this owes to the conservative stocking rate, and the rotational grazing plan that stockpiles forage and tries to graze any given pasture no more than twice a year.

There’s another reason for keeping the herd out of the fescue pastures this time of year, though. From its first recognition by U.S. agronomy in the 1930s, tall fescue quickly spread over wide swaths of the southeastern United States, valued for its ability to produce nutritious forage on poor soils and in droughty conditions.

Fescue has its down side, though. The grass is infected with a fungus that grows between the cells of the plant – an endophyte. The endophyte produces toxins that can, among other effects, raise cattle’s body temperature. That, in turn, keeps them in the shade when they’d otherwise be out grazing, and thus makes them gain weight more slowly.

The amount of endophyte toxin in fescue changes with the season, peaking when the plants have seedheads. Grazing other pastures during those periods can help to avoid its worst effects.

“People have spent a lot of money trying to get rid of it,” Lathrop says of fescue. “We just manage it.”

“Diluting” the fescue with additional forages, like the clover growing so thickly within it in the Kerr Ranch pastures, is another trick for minimizing endophyte-infested fescue’s negative effects on cattle. Clover and other legumes also contribute to the soil’s fertility in the absence of synthetic fertilizers.

The “broadleaf” herbicides commonly used to maintain weed-free stands of pasture grasses are a non-starter in pastures where the Kerr Center has stands of clover and other legumes.

“We can’t spray because it would kill all the legumes!” Lathrop says.

If the plant names in this article don’t bring pictures quickly to mind, try signing up for our free, hands-on pasture plant identification workshop on the evening of June 25. Just a handful of common species make up the majority of plants in a pasture, so a little knowledge can go a long way.