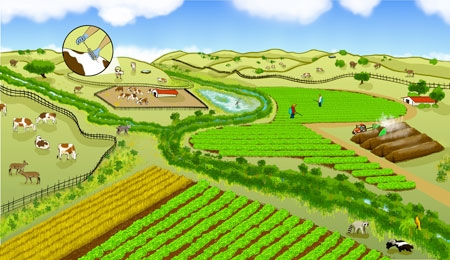 Two new studies by researchers at the University of California highlight the benefits of keeping native vegetation and crop fields in close proximity.

In recent years, clearing such non-crop vegetation from the vicinity of crop fields has been promoted as a food safety measure. However, the second study calls that practice into question. It found that the vegetable crops most likely to harbor pathogenic bacteria like E. coli and salmonella were those around which non-crop vegetation had been cleared to the greatest extent.

The Kerr Center’s Cannon Horticulture Project is already taking advantage of perennial non-crop plants, not only near its vegetable plots, but actually inside them. (Sign up for our elderberry workshop for a close-up look.) Still, it’s always nice to hear from the scientists that we’re on the right track.

Pollination in the Dark

Moths play an important role in ecosystems – as nighttime pollinators – but their numbers are declining right along with bees’. Find out how to help!

Posted On 05/10/2018
Last month I wrote about a presentation at the National SARE Conference in St. Louis about livestock eating weeds. This month I want to point…

December 21 is the deadline for farmers and ranchers to apply for funding from the current round of the USDA’s Natural Resources Conservation Service’s Environmental Quality Incentives Program (EQIP).

In general, the Kerr Center horticulture program is pretty sparing with irrigation. When we do use water, we try to work it so that a little goes a long way. In high summer, when crops…