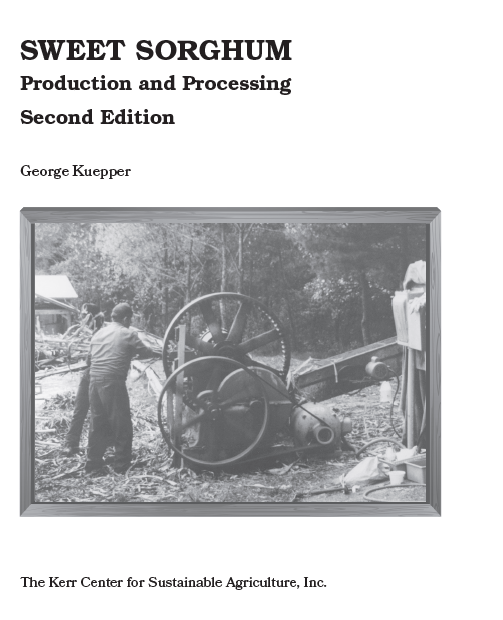 One of the Kerr Center for Sustainable Agriculture’s most enduringly popular publications, Sweet Sorghum: Production and Processing, is now available in an updated second edition.

George Kuepper, the author of the original 1992 report, also penned the new edition.

Sorghum is a traditional crop throughout the southern United States and the lower Midwest. The name also refers to the sweetener made by boiling down the juice from the crushed stalks of the sorghum plant.

The Kerr Center published the original edition in response to the resurgence of interest in small-scale sorghum syrup production, and also to document and share the Center’s extensive experience with the crop.

The interest continues, and most of the original report’s content remains useful and relevant. However, changing times have merited an update.

“Though several aspects of the original manual are dated, the principles and practices described remain contemporary and relevant,” writes Kuepper. “This led to our decision to keep the 1992 document intact, and provide updated information as appendices.”

The updates include a section on sugar cane aphids, which emerged as a serious pest of sorghum in 2013. The report covers sugar cane aphid biology, and explains how to scout fields for it. It also details both organic and non-organic approaches to managing this new pest.

The second edition also explains why many sorghum growers now prefer early deheading, and describes several sorghum varieties developed since the publication of the original report.

New lists of sources of equipment, supplies, and seed, as well as the bibliography, round out the second edition’s updated content.

The new second edition of Sweet Sorghum: Production and Processing is available in both print ($10) and electronic ($18) formats from the Kerr Center website, www.kerrcenter.com.

Jim Horne, Special Projects Director at the Kerr Center for Sustainable Agriculture, retired Dec. 31 after a forty-five year career with the organization. He was honored with a plaque at the trustees’ meeting in early December. Horne first joined the Kerr Center, then known as the Agricultural Division of the Kerr Foundation, in 1972. As…

Many an Oklahoma gardener has come to grief trying to get a vegetable garden going in bermudagrass, even with an arsenal of herbicides to beat the stuff back. No wonder that few did more than roll their eyes when the Kerr Center took on the same task – using only organic methods. Within a few…

The Kerr Center’s “Oklahoma Pollinator Preservation and Education Program” was honored on Sept. 17 with the 2015 Henry Bellmon Award for Environmental Stewardship.