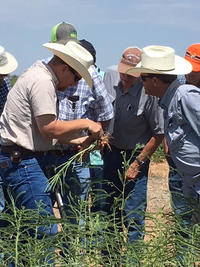 Just across the state line in Vernon… (via Southern SARE)

It’s a hot, dry, windy summer day on the plains of North Texas, and a group of farmers are standing in the middle of a field to learn how techniques to build soil health benefit their cash crops in Texas’ harsh environmental conditions.

“This is what no-till looks like in the first year,” said Nathan Haile, a soil health specialist with the Natural Resources Conservation Service (NRCS). Ripped in October 2017 and planted with cover crops, the field was sparse and weedy. “You need to start with a good year, and this was not that,” said Haile, indicating that the region had only received four inches of rain since May. The historical average is 25 inches.

But the advantages to no-till and cover crops is what is happening underneath the top soil —  breaking up that compaction, building soil microbial communities and capturing/retaining much needed moisture. “The first three to four years of no-till may not be pretty, but if you stick it out, you can get through the challenges,” said Haile. “We have farmers that have been in no-till and cover crops for 10 years, 15 years, or more and the soil health benefits are evident.”

The stop in Iowa Park, TX was part of a larger Rolling Plains Field Tour on August 29 to show farmers how the soil structure changes from a conventional tillage system to a no-till system and how soil health improves under such techniques as crop rotation, residue management, cover crop mixes, biomass production for grazing, and double cropping for water management.

On another stop along the tour in Electra, TX, farmers had the opportunity to see the results of Texas A&M research on using cover crops and double crops for building soil health in a wheat field that has been in no-till for 15 years. Mixed species cover crops are most commonly recommended in the region.

“Can double cropping produce the same benefits as a cover crop mix and can farmers make a profit on their cash crop?” said Paul De Laune, Texas A&M soil scientist. The researchers studied the following double crop options: mungbeans, cowpeas, pigeon peas and guar, and saw improved wheat yields in one year out of the three years of study. In addition, double crops did provide some stored soil moisture at the time of wheat planting.

“When you have the right double crop, you can see the advantages in wheat yields,” said De Laune.

Another advantage of cover crops is the biomass multiple species can produce. De Laune indicated that anywhere from 3,000 to 6,000 pounds of biomass was produced on the research site. “Some legume monoculture cover crops, such as the newly released Ace forage cowpea, can produce similar biomass as mixed species while accumulating over 100 pounds of nitrogen per acre,” he said.

Other stops on the tour included visits to farms in Elliot and Holliday, TX to view research on residue management and the optimal time to terminate cover crops, as well as the grazing potential of cover crops compared to wheat.

“Cover crops are a way for farmers to transition into a healthy soil system. It’s time to start treating a cover crop as a real crop and not as a step-child crop,” said Haile.

Published by the Southern Region of the Sustainable Agriculture Research and Education (SARE) program. Funded by the USDA National Institute of Food and Agriculture (NIFA), Southern SARE operates under cooperative agreements with the University of Georgia, Fort Valley State University, and the Kerr Center for Sustainable Agriculture to offer competitive grants to advance sustainable agriculture in America’s Southern region. This material is based upon work that is supported by the National Institute of Food and Agriculture, U.S. Department of Agriculture, through Southern Sustainable Agriculture Research and Education, under sub-award number: LS16-271. USDA is an equal opportunity employer and service provider. Any opinions, findings, conclusions, or recommendations expressed in this publication are those of the author(s) and do not necessarily reflect the view of the U.S. Department of Agriculture.