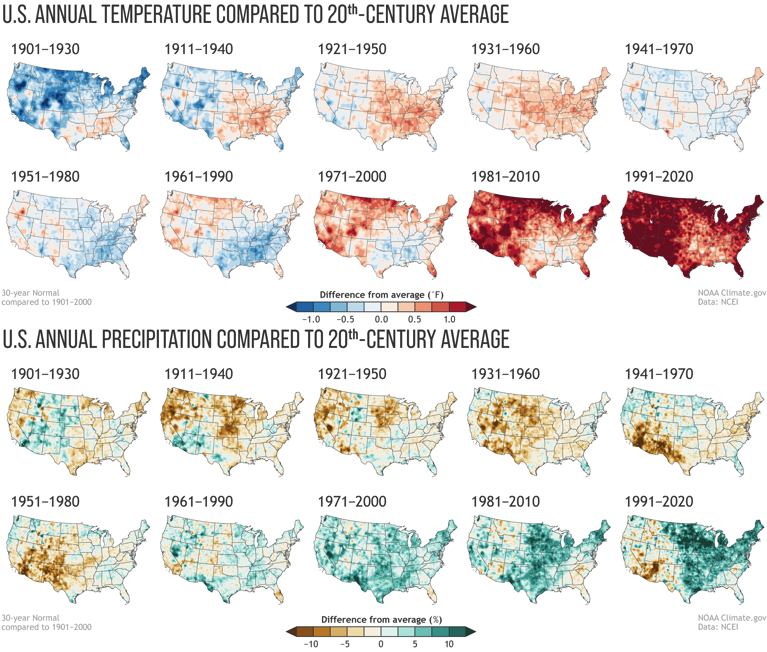 Over the past year or so, we’ve all been hearing the phrase “the new normal” a good deal more often than, well… normal. Now NOAA, the National Oceanic and Atmospheric Administration, is getting in on the action, with its own set of “new normals.” Actually, for NOAA, it turns out that there’s nothing new about new normals: the agency publishes a new normal every ten years!

Naturally, though, the agency has a more precise definition of “normal”: the U.S. Climate Normals, as they’re called, are 30-year averages of weather conditions in the United States, compiled from weather stations all around the country. According to NOAA, the Climate Normals are “the basis for judging how daily, monthly and annual climate conditions compare to what’s normal for a specific location in today’s climate.”

Along with the latest Normal, NOAA has released a series of maps comparing both the temperature and rainfall in each 30-year Normal to the overall average for the entire 20th century. The maps reveal not only the widely known warming trend over the past hundred years, but also a less-mentioned increase in rainfall over much of the country – including most of Oklahoma – during the most recent four Normals.

As for the increased precipitation over the most recent four Normals, at least some of it “is linked to the overall climate warming and “wetting” of the atmosphere that’s occurred as rising temperatures cause more water to evaporate from the ocean and land surface.”

The NOAA website offers a series of more detailed maps of temperature and precipitation trends, as well as an interface to generate custom graphs for a particular location.