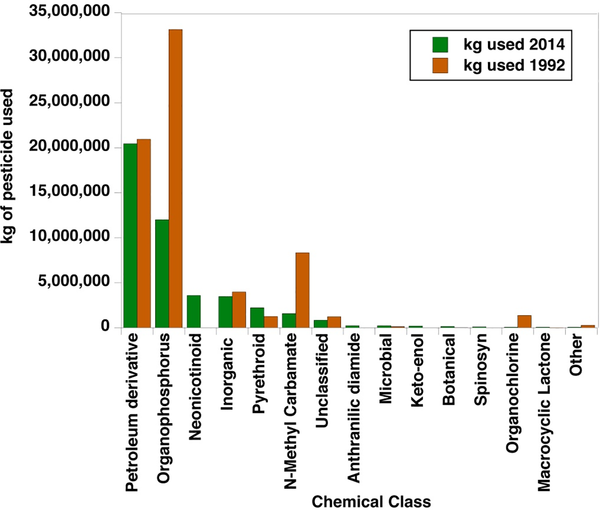 When it comes to pesticides, there’s good news and there’s bad news.  The good news is, farmers aren’t using as many tons of insecticides as they did in years past.

The study that reported these shifts, published in August in PLOS One, examined the period between 1992 and 2014.

That represents a drop in the overall weight of pesticides applied to fields each year, but there’s a catch – actually, a few catches.

First, neonics persist much longer in the environment that organophosphates – up to nearly three years from a single application.

Second, they’re applied preventively as a seed coating to crops like corn and soybeans – which together accounted for nearly half the increase in pesticide toxicity in U.S. agriculture overall.  That eliminates the possibility of waiting to see whether, and to what extent, pests appear during the growing season before deciding whether to apply pesticide.

Fourth, they’re water-soluble, meaning that as little as five percent of the pesticide stays on the plant.  The rest washes off to impact non-target organisms.

The study meaured toxicity by combining three aspects of each insecticide: toxicity to honeybees, persistence in the environment, and the amount used annually.  Using this index, average contact toxicity increased fourfold over the study period.  Average oral toxicity went up even more – by the 50 times mentioned in the headline.

The study only assessed toxicity to honeybees, using them as an indicator species.  This overlooks many other species, but parallels the approach the EPA uses when evaluating pesticides’ potential impacts.  The impacts likely extend to many other beneficial insects, which have been part of the mass declines in insect populations over the same time period.

National Geographic featured the study’s results in an August article.

Deadlines are quickly approaching for a USDA-NRCS program that can help Oklahoma farmers and ranchers manage their property for monarch butterfly habitat.

Monarch Watch is now accepting pre-orders for milkweed plants, to be shipped in the spring. Seedlings are sold by the flat, with varieties sorted by region.