Which Pumpkins to Pick? 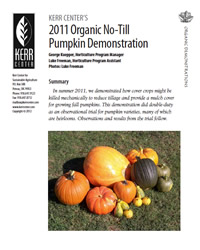 Want to know which heirloom pumpkin varieties make the spookiest jack-o’-lanterns? We may not be able to help with that. However, we do have a report documenting the results of an heirloom pumpkin demonstration.

Perhaps even more interestingly, the pumpkins in the demonstration were grown in an organic no-till system on the Cannon Horticulture Plots.

With conventional herbicides prohibited, organic farming traditionally relies on mechanical cultivation for weed control – but that leaves the soil surface more exposed and disturbed, creating more opportunities for erosion. No-till systems, by contrast, keep the soil much better covered – but typically use synthetic herbicides to terminate the cover crops.

This demonstration used a specially developed roller to mechanically terminate warm season cover crops to prepare the pumpkin beds for planting – keeping weed pressure down while protecting the soil. The report summarizes data on the three summer cover crops – crotalaria, sesbania, and pearl millet – used in the demonstration.

These were also evaluated relative to one another as part of the demonstration, with observations including extent of regrowth following mechanical termination, and effectiveness for weed control.

The report is available free in electronic format from the Kerr Center’s online horticulture library.

Newly published research reveals that intercropping cowpeas with vegetable crops can boost yields, as well as drawing larger numbers of pollinators to fields. Yield increases from intercropping with cowpeas ranged from 7% in okra to 27% in squash to 54% in watermelon. Researchers at North Carolina A&T State University conducted the study with support from…